In May 2018, the President of the 73rd Session of the United Nations General Assembly H. E. María Fernanda Espinosa paid a 2-day working visit to Ghana. 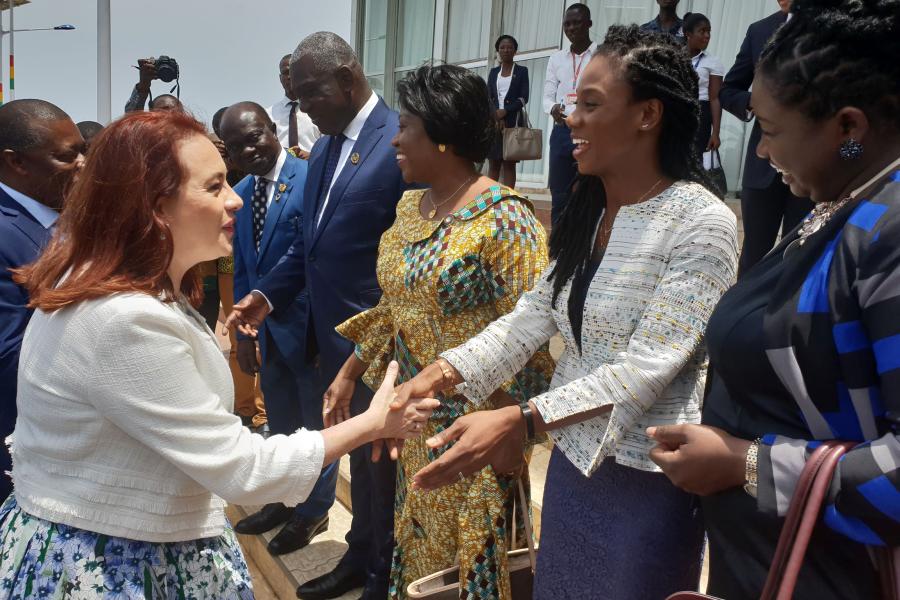 When she took office to preside over as President of the Seventy-third Session of the United Nations General Assembly (GA) in September 2018, H. E. María Fernanda Espinosa Garcés of Ecuador committed to make the global body “…relevant to all people” and by highlighting the essence of global partnership and multilateralism for a better world.

She writes “Each and every one of my action will bear in mind the fact that the main recipients of our commitments and decisions are our people” stressing that “we are working for them”.

This assertion is evident in the choice of the theme for the 73rd session of the UN General Assembly “Making the UN Relevant to All; Global Leadership and shared Responsibilities for Peaceful, Equitable and Sustainable Societies.”

In May 2019, the United Nations in Ghana welcomed H. E. María Fernanda Espinosa Garcés during her visit from May 8 – 11, 2019 as part of her 3-nation official visit to Central and West Africa. The other countries visited were Chad and Nigeria. Her team included the Chief of Cabinet at the UN General Assembly, Amb. Kwabena Osei-Danquah, the Permanent Representative of Ghana to the United Nations, Amb. Martha Pobee and an Advisor to the President of the GA, Ms. Khalilah Hackman, all of whom are Ghanaians.

She was met on arrival by the Minister for Planning, Professor Gyan Baffour, the Presidential Advisor on SDGs, Dr. Eugene Owusu and UN Resident Coordinator a.i., Ms Sylvia Lopez-Ekra.

Purpose of visit and a meeting with Foreign Affairs Minister

The visit sought to strengthen political support for and cooperation with the United Nations General Assembly. Ms. Espinosa used her visit to highlight Ghana’s leadership role and support for the implementation of the 2030 Agenda and to acknowledge the support of Ghana to the Office of the President of the General Assembly. Following her call on the Minister for Foreign Affairs and Regional Integration, Hon. Shirley Ayorkor Botchwey (MP), the PGA, together with Hon. Botchwey, briefed the local media. Ms. Espinosa called for stronger multilateralism to address global challenges such as illegal migration, climate change and gender inequality.

Bilateral meeting with the President of Ghana

Ms. Espinosa later held bilateral talks with President Nana Addo Dankwa Akufo-Addo of Ghana at the Jubilee House in Accra.  She congratulated the Ghanaian President on his reappointment as Co-chair of Eminent Advocates on SDGs and on his leadership role towards SDGs implementation in Ghana.  She expressed her admiration of  “how Ghana is accelerating the implementation of the SDGs”, adding that “the SDGs are in the DNA of Ghana”.

Here, the PGA learnt about the level of preparedness of the country’s participation in the Voluntary National Review of the SDGs implementation in July this year. Ms. Espinosa commended Ghana for its leadership role on advocating for the 2030 Agenda. She noted that “it is enviable to see Ghana spread the leadership of the SDGs implementation among its Ministers with the setting up of the HLMC, adding that “I am extremely encouraged by what I have learnt and want to be an ambassador on SDGs for Ghana”.

Ms. Espinosa explained to the HLMC that data and information on the SDGs are a shared challenge and advised the Committee to take indicators seriously in order to accurately tell their SDGs implementation stories.

In solidarity with Parliament as the best forum to harness multilateralism and lead in formulating legislation for the good of humanity, the President of the 73rd Session of the UN General Assembly, Ms. Espinosa later called on the Speaker of Parliament of the Republic of Ghana, Hon. Mike Aaron Oquaye. Their discussions centred on good governance and building political will for the implementation of global commitments crucial for effective responses to global challenges. 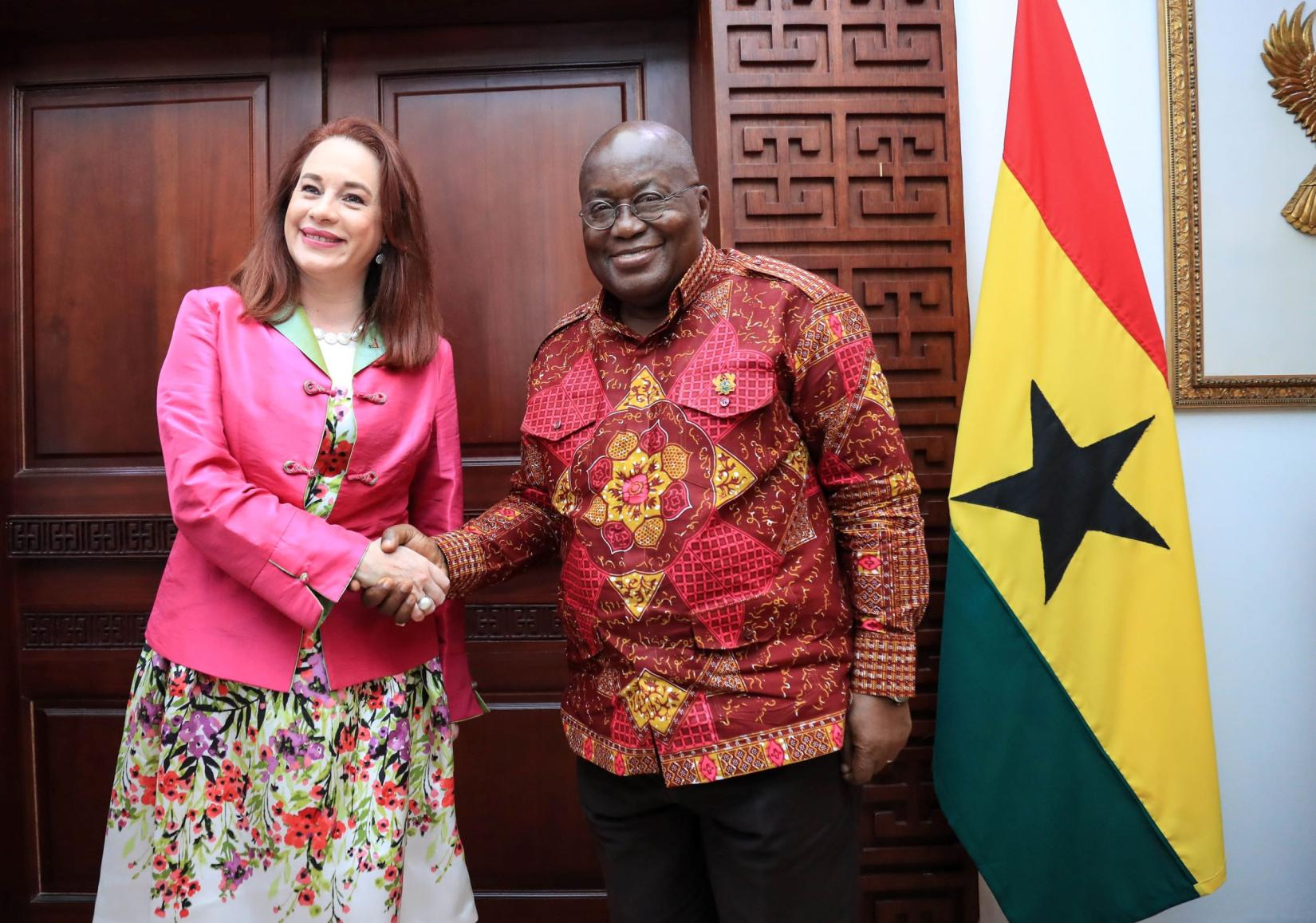 Guest Lecturer at the CFRG

She also addressed an audience of about 300 at the Council of Foreign Relations Ghana’s Distinguished Lecture Guest Series where she urged world leaders to urgently increase their commitments and actions to tackle climate change and environmental degradation.

Speaking on the topic: “responding to global challenges in a fast-changing world: the case for strengthening multilateralism”, Ms. Garcés noted that the world is confronted with many challenges as nearly 1milllion animals are at the risk of extinction, rainforests are dying, desertification is expanding in Africa, and plastic pollution is increasing. She added that carbon emissions is on the rise daily and most of these environmental challenges are caused by human activities. To address these global challenges, she emphasized the need for more commitment from leaderships across the world especially from Africa. She also indicated that issues must be prioritized to ensure that critical development challenges are not overlooked.

“Every development issue is urgent, but we need to prioritize. Let us focus on tipping points. As per the words of Kofi Annan, I am a stubborn optimist and I remain confident that together we can navigate the challenges we face “, Ms. Garcés added.

Ms. Garcés cited four key areas as tipping points for prioritization and these include climate change, economy, social contracts, and the health of multilateralism. In terms of climate change, she stressed on the need to increase climate actions to cut global greenhouse gas emissions to meet the 2°C goal. She also stated that it is critical to focus on improving economic growth as global growth is going down, calling for an urgent need to reduce inequality through creation of more jobs towards poverty eradication. Multilateralism, she said, is working every day, as this strengthens countries to achieve the best, hence the need to improve partnerships.

On her part, the Chairperson for the lecture Mrs. Mary Chinery-Hesse, the Chancellor of University of Ghana, commended Ms. Maria Fernanda Espinosa Garcés for her decision to make the strengthening of multilateralism one of her priorities.

“There are many challenges the world faces but It is obvious that you, as many of us, have deep faith in the multilateral system as a good basis for making the world a better place,” Mrs. Chinery-Hesse noted.

The President of the 73rd Session of the UN General Assembly travelled to the Ashanti Region where she paid a courtesy call on the Asantehene, His Majesty, Otumfuo Osei Tutu II.

Laying wreath in honour of slaves

Another point of call was at the Elmina Castle where she laid a wreath in memory of the millions of slaves who left the shores of Ghana 400 years ago. Ms. Espinosa said humanity must learn to be tolerant, have respect for each other, human rights and human dignity, encourage more dialogue for a peaceful world.

“I am overcome with unimaginable horror and pain as, 400 years after the first slaves landed in America, I walk in the footsteps of those kept in the dungeons…” she noted.

Ms. Espinosa visited a UNFPA Ghana-supported project site in Agbogbloshie, in Accra where she received a rousing welcome by the community of mainly female porters, known as Kayayei. The Future First Academy, a day care centre, has been established by a local NGO to cater for children of the Kayayeis.  Here, the PGA interacted with the children. She later in the day visited 2nd Image to see at first hand some initiatives by the private sector to provide skills training to young women and girls.

“Thank you, colleagues” – PGA to UNCT in Ghana

Ms. Espinosa could not have left the shores of Ghana without paying a visit to the UN Country Team in Ghana, under the leadership of Ms. Sylvia Lopez-Ekra as Resident Coordinator a.i. and Chief of Mission of IOM. Ms. Espinosa congratulated the UNCT for the work they do on the ground and encouraged them to keep their ears on the ground to understand and meet the aspirations of the people they serve. 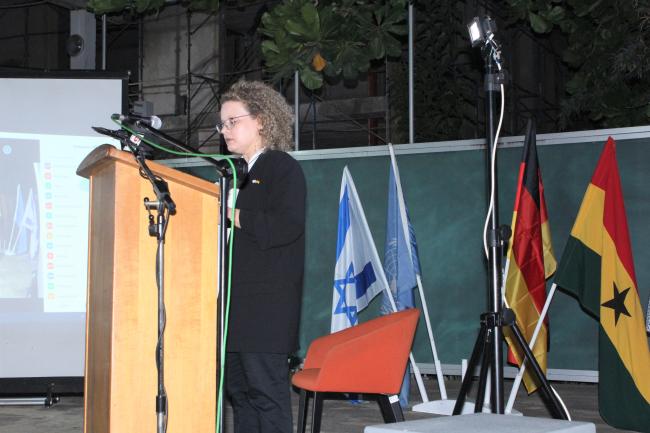 Holocaust Remembrance Day took place in Accra under the auspices of the Embassies of Israel and Germany and the United Nations in Ghana. 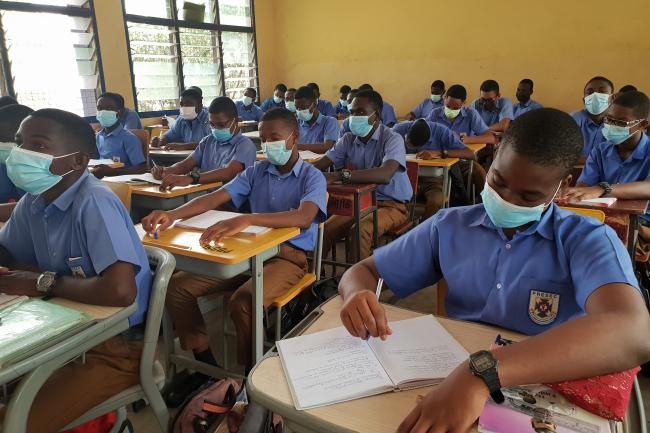 In observance of International Day of Education, the UN and partners toured some schools in Accra to assess their adherence to the COVID-19 safety protocols.