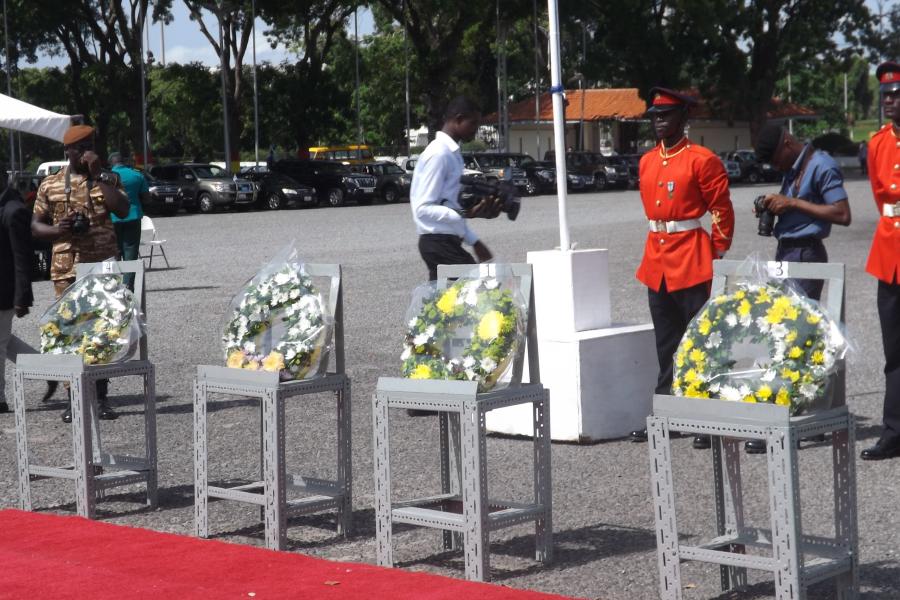 UN Headquarters will observe the International Day of United Nations Peacekeepers on Thursday, 27 May 2021. Secretary-General António Guterres will lay a wreath to honour the more than 4,000 UN peacekeepers who have lost their lives since 1948 and will preside over a ceremony at which the Dag Hammarskjöld Medal will be awarded posthumously to 129 military, police and civilian peacekeepers, who lost their life serving under the UN flag last year and in the first month of this year.

The two Ghanaians will be honoured at a ceremony to be presided over by the United Nations Secretary-General, Antonio Guterres in New York on 27 May 2021 as part of events marking the 2021 International Day of UN Peacekeepers.

Ghana is the 10th largest contributor of uniformed personnel to UN Peacekeeping.  It currently deploys nearly 2,300 military and police personnel to the UN peace operations in Abyei, the Central African Republic, Cyprus, the Democratic Republic of the Congo, Lebanon, Mali, the Middle East, Somalia, South Sudan and the Western Sahara.

During the ceremony, the Secretary-General will also award the ‘2020 Military Gender Advocate of the Year Award’ to Major Steplyne Buyaki Nyaboga a Kenyan military officer who served with the African Union – United Nations Hybrid Operation in Darfur, (UNAMID). Created in 2016, the Award “recognises the dedication and effort of an individual peacekeeper in promoting the principles of UN Security Resolution 1325 on women, peace and security.”

In Ghana, a virtual youth engagement will be held in commemoration of the Day.  Tributes will be paid to Ghanaian peacekeepers serving to ensure the maintenance and sustenance of peace and those who have lost their lives in the cause.  Participants at the virtual event will interact with two young Ghanaian peacekeepers serving with the UNIFIL.  They will share their experiences with the goal of inspiring young people to champion the cause for peace and security. To participate in this event, please register here: http://bit.ly/UNinGhana

In a message to mark the Day, the Secretary-General said of the fallen peacekeepers: “Their service and sacrifices will never be forgotten.”  He further said: “I express my deep gratitude to the 85,000 civilian, police and military personnel currently deployed in some of the world’s most challenging hotspots to protect the vulnerable and help to build peace. Despite the restrictions imposed by the pandemic, as well as the risk of infection, these men and women have pursued their mission while also supporting local authorities in the fight against COVID-19. I offer sincere condolences to the families of peacekeepers who have fallen victim to this terrible disease.”

The theme for this year’s observance is “The road to a lasting peace: Leveraging the power of youth for peace and security.” Tens of thousands of young peacekeepers deployed around the world play a key role in helping UN missions implement their mandated activities, with the active participation of young people from host communities.  Across our missions, peacekeepers collaborate with youth to reduce violence and sustain peace, including through DDR and Community violence reduction programmes.

Jean-Pierre Lacroix, Under-Secretary-General for Peace Operations, said: “We salute the dedication and bravery of our peacekeepers, who serve and perform admirably in challenging environments only compounded by the ongoing pandemic. I also honor our young peacekeepers who bring energy and innovation, and serve as role models to youth populations working tirelessly to ensure meaningful representation and participation in political processes.”

He added: “Our peacekeepers deserve our full support, and we must continue to work together to do all we can to improve their safety and security and give them the tools to succeed.”

The International Day of United Nations Peacekeepers was established by the General Assembly in 2002, to pay tribute to all men and women serving in peacekeeping, and to honour the memory of those who have lost their lives in the cause of peace. The General Assembly designated 29 May as the International Day of UN Peacekeepers in commemoration of the day in 1948 when the UN’s first peacekeeping mission, the UN Truce Supervision Organization (UNTSO), began operations in Palestine.

Since then, more than 1 million women and men have served in 72 UN peacekeeping operations, directly impacting millions of people, and saving countless lives. Today, UN Peacekeeping deploys more than 89,000 military, police and civilian personnel in 12 operations.